This weekend trip to Komodo Island made my third-grade dreams of seeing these dinosaurs come true and proved to be well worth the wait.

During my fieldwork in Bali, I got the chance to go to Flores and take a day trip to Komodo Island. Getting to Flores was easy enough, direct 2-hour flight from Bali to Labuan Bajo, costing around $130 round trip. We stayed at the Bajo Komodo Ecolodge which I would fully recommend, while it was a little more than staying at a hostel it was a gorgeous lodge with decent breakfast and pool, as well as a view of the sea with a nice pier walk to the beach, with the caveat being the seas pollution may make it unswimmable depending on the season (something the receptionist told us on arrival). 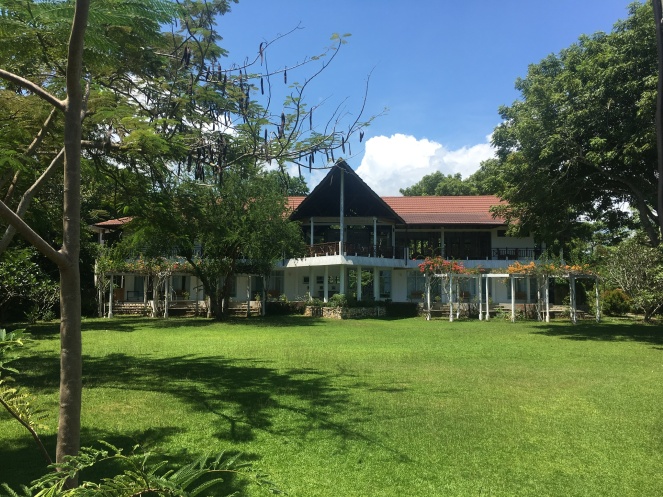 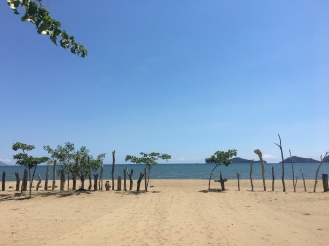 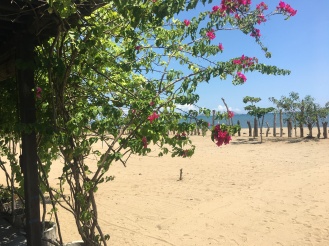 While Flores has a lot to offer on its own, the highlight here is Komodo Island!

To get to Komodo Island you need to take a tour or I suppose you could hire a boat by yourself, but I would recommend doing the full tour as not only do you do the dragon island but also visit several other highlighted spots in the area. 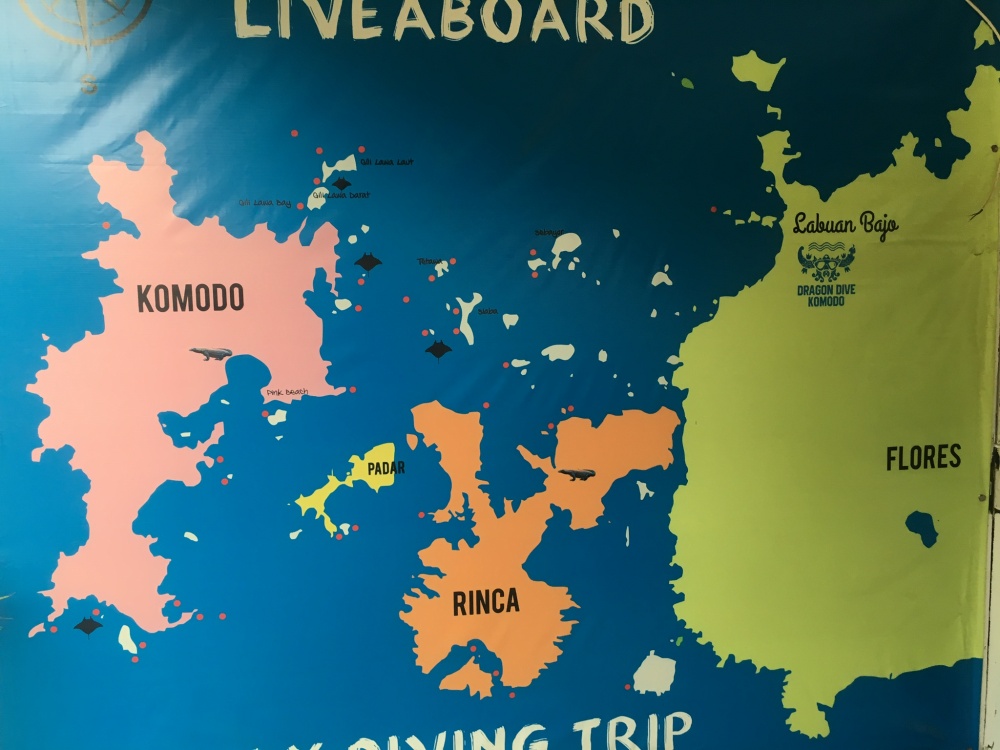 We picked Go to Komodo Tours and had a fantastic time. We picked the second tour which cost 650.000 IDR/47 USD per person, which was similar pricing to most full day tours in the area.

The full-day tour includes waking up early at 5:00 for an island hike at Padar Island, a guided hike at Komodo Island,  chilling at Pink Beach, and snorkeling at Manta Point where you’ll see giant manta rays. At the end of this exciting and exhausting day, we arrived back at our lodge at around 16:00. 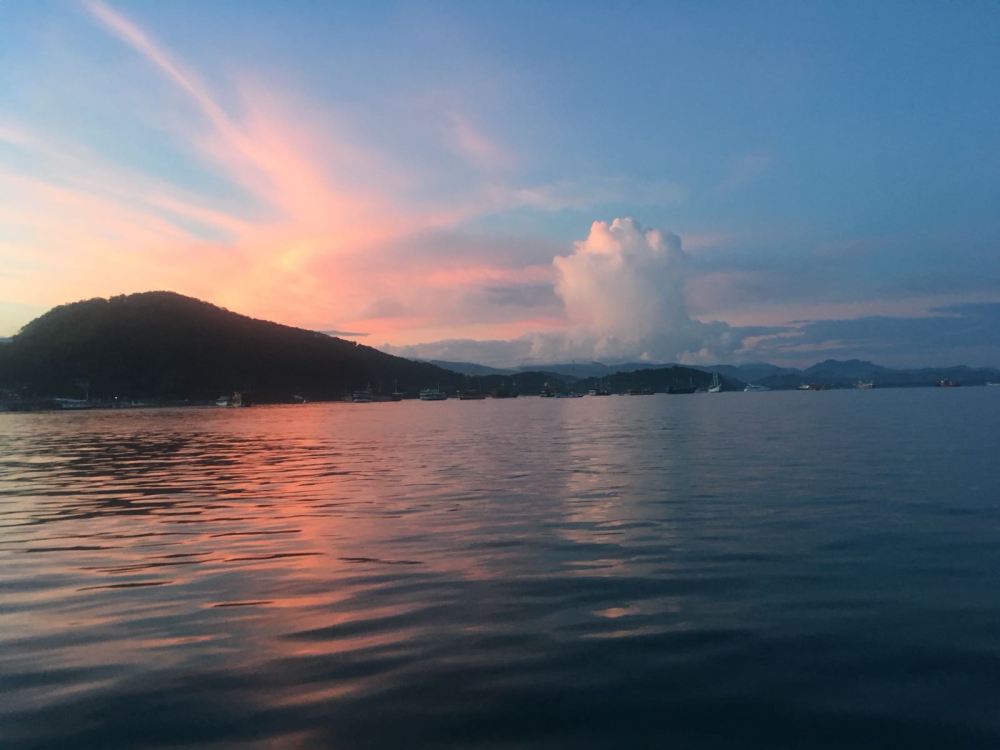 The first stop, Padar Island, is about around two hours away by boat. You arrive early enough to miss the terribleness of the midday sun. Surprisingly, there are steps leading you up most of the way and then for those who want to make their way to the top, it becomes steeper and rockier past the stairs. We were determined to make our way to the very top of the island and were thoroughly covered in sweat by the time reach the highest point to get the most spectacular view of all the surrounding islands.

Make sure to bring some real sneakers if you want to do the hike, as our friends in flip flops couldn’t make it up the steep rocks past the stairs. 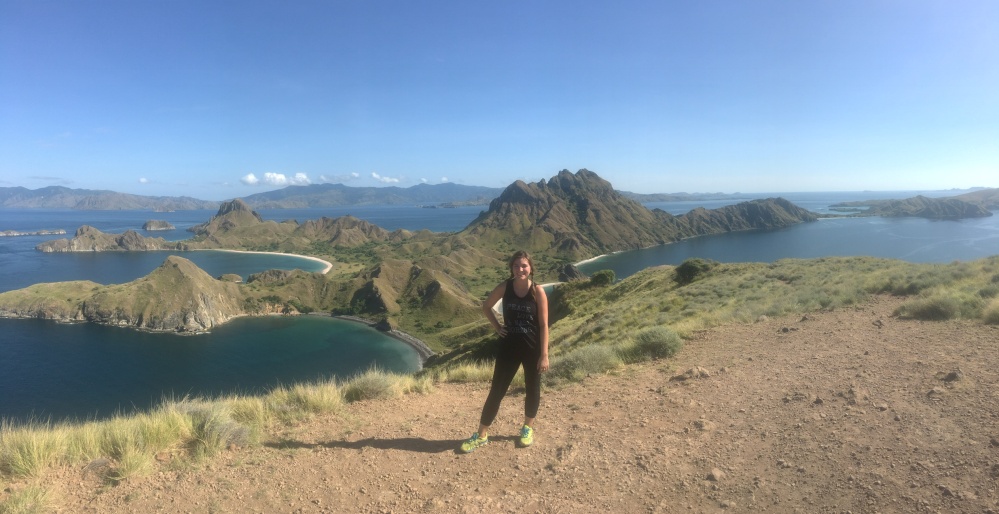 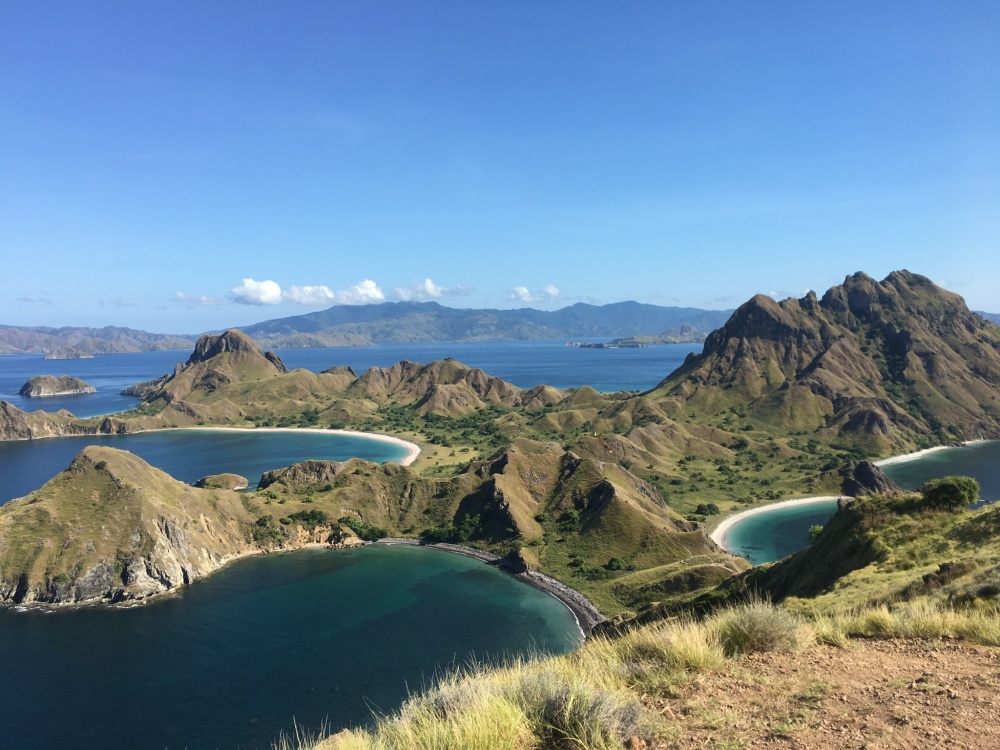 After the beautiful but sweaty hike, you get to take another hour boat ride to cool off and build up excitement for Komodo Island and finally see some dinosaurs! 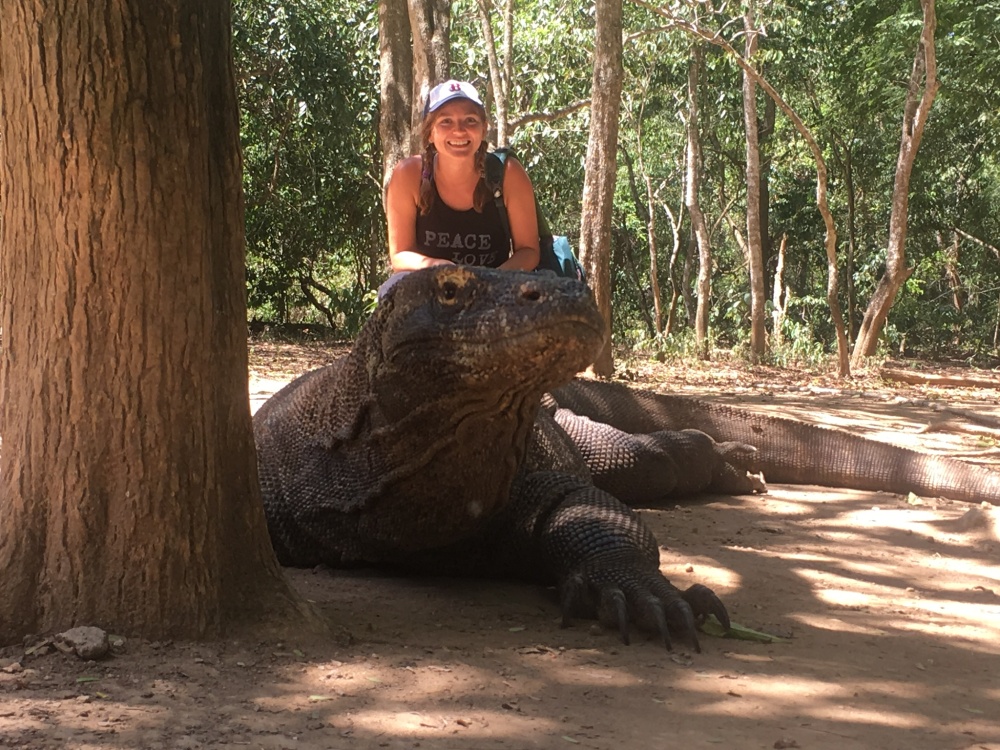 Arriving there you are welcomed onto a long dock and entrance sign. During our excitement of this sign we almost missed the Komodo dragon casually walk up behind us who was about 5 feet long and “small” we later found out!

From there you go to the ranger station, pay the entrance fee and get a ranger. There are four treks: short, medium, long, and adventure. We wanted to go for the long trek but due to the other people on the day tour we had to do the short trek which is easy and about an hour long, still awesome! Our guide was a man who grew up on Komodo Island in the nearby village and carried a stick for protection. The Rangers share a lot of information about the dragons and show you an old Komodo nest, while it’s clear they’ve memorized a script and struggle to answer questions off the hand, they’re very knowledgeable and tell you the most important facts about the dragons. 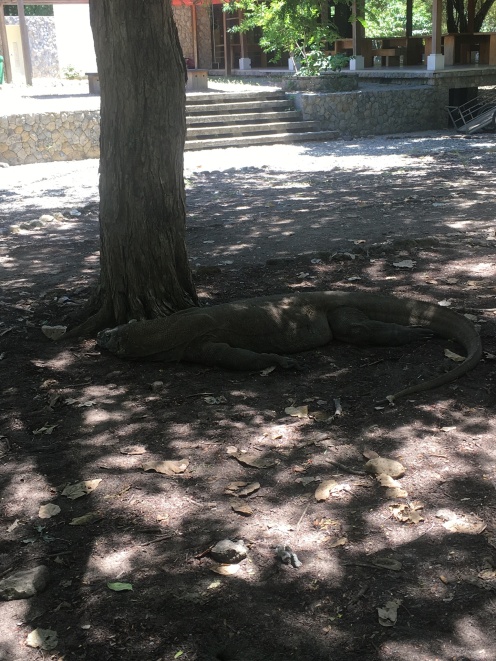 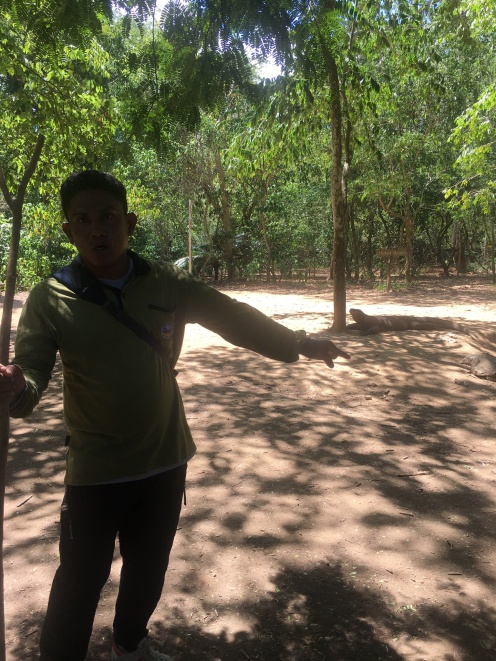 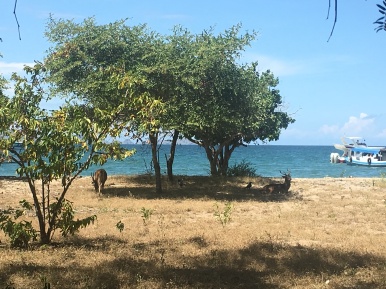 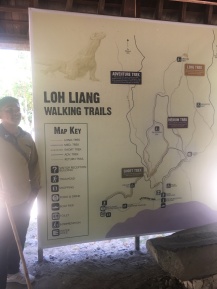 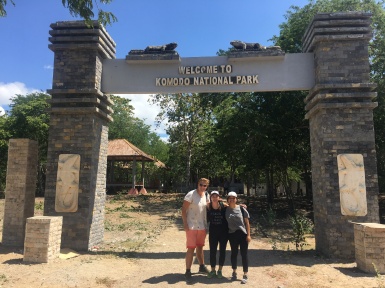 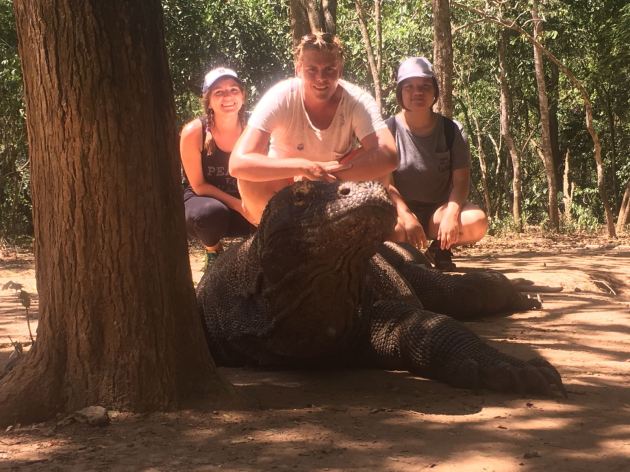 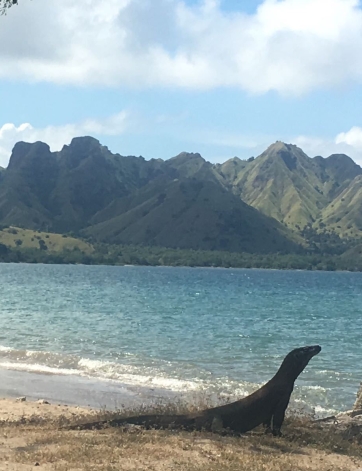 Seeing as we got there around noon when the sun is at its hottest, all the dragons we saw were lounging in the heat. The first dragon we got to was massive and our ranger guided us around him and took pictures of each of us with the dragon, something that was clearly very practiced but did turn out a great picture and the dragon couldn’t care less.

During the walk, we also saw wild pigs and some small deer. Back at the ranger station, there were several even bigger dragons, also lazily lying around, who we were told are fed by the rangers so they’re always there.

After making dreams come true with Komodo Island you get back on the boat for a simple lunch box with options of fish, chicken, or vegetarian. The next stop is Pink Beach with some snorkeling for small colorful fishes. I’ve seen a lot of posts about Pink Beach and I have to admit that when we were there we didn’t know it was anything special because, quite simply, it wasn’t pink. Where the waves hit the shore was slightly pink, but not enough to make an impression on me. I didn’t realize it was a trendy spot until afterward seeing blogs and such about it. Regardless, it was a  nice spot to relax and swim after lunch.

The next spot on the way back was Manta Point, which was my happiest surprise of the day. We had our flippers and snorkels on and the boat driver went to the bow of the boat and watched the water and then yelled “Now!  Now!” and we jumped in and looked down to be greeted with Giant Manta Rays. As I’m not a big snorkel person this was the biggest surprise because these creatures were amazing! They were behemoths in the water, gracefully going about their business. When one would get out of the site, the boat driver would point to a new place for us to try and make our way to and see the giants again. We spent quite a while here watching these magnificent creatures. 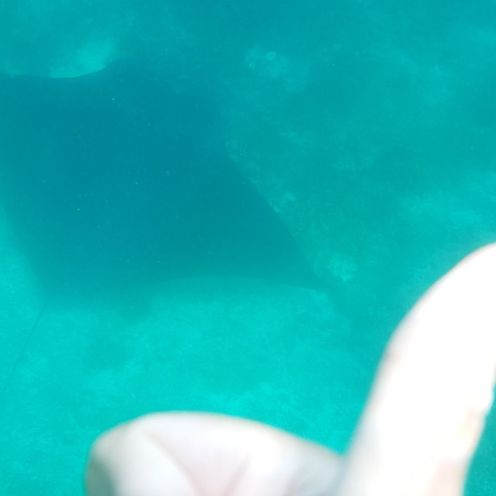 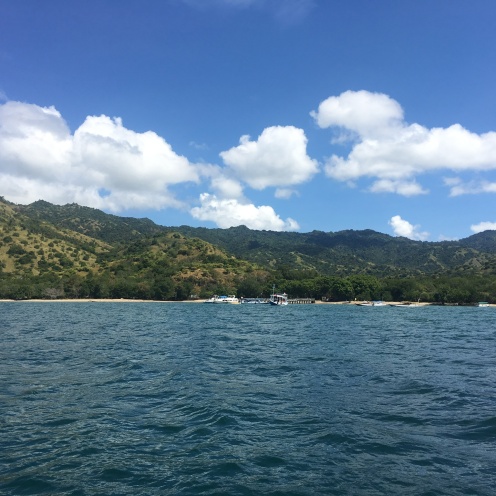 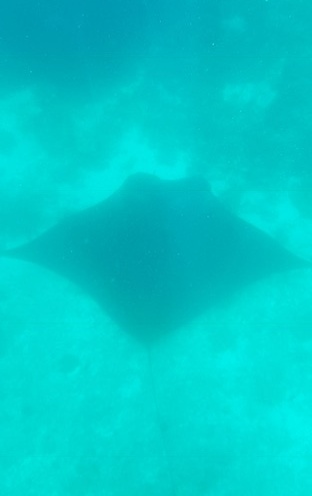 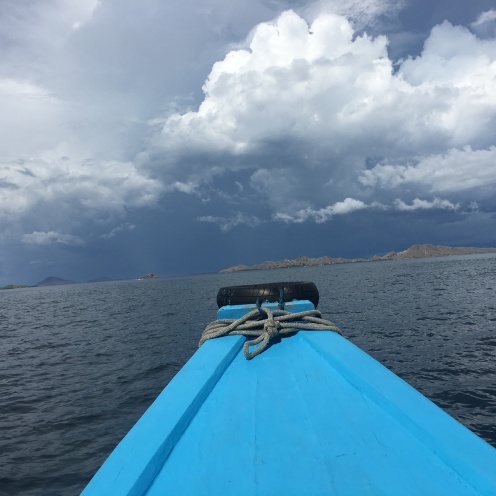 If you have the time and are in Indonesia I would say 300% to go and visit Komodo Island and Flores. We had an amazing day trip to this wonderful island and there are four other islands you can visit to see the amazing living dinosaurs. It is also is not bustling or overcrowded with tourism right now, while we didn’t go during the busy season it’s clear that this is still a gem within Indonesia, not Westernized and crazy like Bali. Likewise, if you have the time you can explore Flores. Sadly we only had the weekend to visit but Flores is now on my ever-growing list of places to go back to and fully explore. So, final thoughts- visit Komodo Island, you won’t regret it!

We did this very short and nice hike at sunset on Flores our first night there with an absolutely incredible view. Very easy to take a taxi or motorbike to this side of the island past the airport and do a quick hike up one of the hills for a spectacular view. 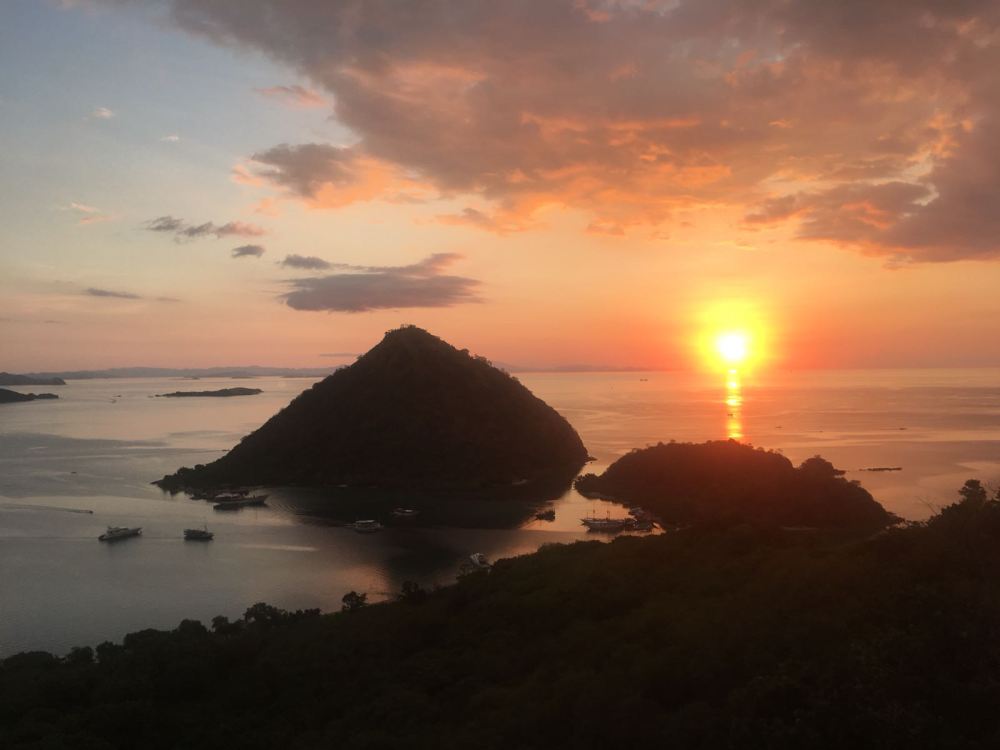